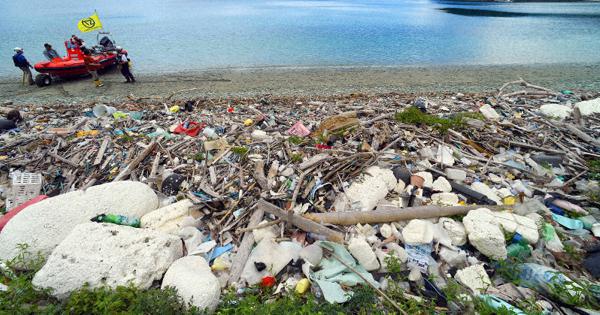 From production to consumption, single-use plastics linked to greenhouse gases and waste

TOKYO – The hundreds of millions of tonnes of single-use plastic that we produce and throw away each year are linked not only to waste issues, but also to the global climate crisis. That’s the main thrust of a recently released report that tackles the roots of the global single-use plastics problem: who makes how much and where do manufacturers get their money. And while Japan certainly isn’t plastic’s biggest ogre, it isn’t an angel either.

According to the Plastic Waste Makers Index, compiled by the Australian philanthropic foundation Minderoo and audited by KPMG International Ltd., Japan’s domestic production of single-use plastic in 2019 was around 5.3 million metric tons, with 1. 7 million additional tonnes imported. This equates to 37 kilograms of substance per person per year, the 18th in the world.

That’s well below the United States, at 53 kilograms of disposable plastic per person per year, or Australia, at 59 kilograms. But it’s also a little more than the 23 kilograms of Italy, a G7 country, and more than double the 18 kilograms of China. (Singapore comes first, with 76 kilograms per capita.)

To put this in a global context, according to the United Nations, more than 400 million tons of plastic are manufactured each year in the world, of which 300 million tons become waste. â€œIf current consumption patterns and waste management practices do not improve,â€ says a 2018 UN document, â€œby 2050 there will be around 12 billion tonnes of plastic waste in landfills and in the natural environment “.

In recent years, much media attention has been paid to how much of this garbage ends up in the ocean, forming giant trash islands and permeating the underwater world with microplastics. A 2016 World Economic Forum report estimated that more than 8 million tonnes of plastic end up in the ocean each year. By 2025, there could be 1 ton of plastic in the sea for every 3 tons of fish, and by 2050, plastic could trump fish (although some of that plastic is, admittedly, inside the fish).

What role is Japan playing in all of this? The 2018 UN report notes that, unlike several other countries, Japan has not banned single-use plastics outright, but “thanks to a very efficient waste management system and a high degree of social conscience, the country experiences relatively limited leaks of single waste. use plastics into the environment. ”

According to the Ministry of the Environment, while Japan produces some 9.4 million tonnes of plastic waste per year (including industrial waste), about a quarter of this is recycled and 57% is burned to produce energy. The remainder, about 18%, is incinerated or landfilled.

At the same time, the Japanese government has set a target of reducing single-use plastics by 25% by 2030. It also seeks to make reuse and recyclability mandatory for all plastic containers and packaging by 2025, to achieve a 40% recycling rate for these items by 2030, and “100% efficient use of used plastics by 2035”. Some action has already been taken, with retailers now banned from handing out plastic shopping bags for free unless they are made of at least 15% biomass. Japan therefore does not seem too bad when it comes to plastic waste management.

The country is also leading an international campaign to reduce plastic waste and improve its management, with its Osaka Blue Ocean Initiative launched at the G20 summit in Osaka in 2019 to “reduce to zero additional plastic pollution due to marine plastic litter. ‘by 2050’. This has led the MARINE Initiative to â€œsupport empowerment in developing countries to promote waste management, marine litter recovery and innovationâ€.

But most of this information relates to the end user; what happens to plastics once they are on the market and in the garbage. The Plastic Waste Makers Index deals with this aspect of the problem, but it focuses most of its attention on the plastic manufacturers and their money.

According to the report, a relative handful of companies are responsible for more than half the volume of plastics we throw away, “with 20 polymer producers accounting for about 55% of the world’s waste – and the top 100 accounting for over 90%. Topping the production rankings is US oil giant Exxon Mobile Corp., with around 5.9 million tonnes of single-use plastics per year, followed by US chemicals company Dow Inc. with 5.6 million tonnes. tonnes, and China Petroleum & Chemical Corp. (Sinopec), at 5.3 million tonnes. The highest ranked Japanese company is Sumitomo Chemical Co., in 25th place with 1 million tonnes.

In short, the companies pumping our plastics are big business, with investors enjoying the gains and lenders making sure their day-to-day operations are financially covered. In the first category, 32% of investments in single-use plastics are held by public entities. The Japanese government has invested around $ 400 million in the industry, not a small number but far from No. 1 in Saudi Arabia, which has estimated total investments of $ 31 billion in the plastics sector. for single use.

That oil companies are responsible for so much of plastic production, and that the largest state investor is an oil-producing country, is no surprise, the report notes. More than 90% of plastics are derived from fossil fuels, according to the WEF, with the industry absorbing “about 6% of global oil consumption, which is equivalent to the oil consumption of the global aviation sector.” And if the current trend of ever-increasing demand for single-use plastics continues, according to the index, the manufacture of these products could account for 5-10% of greenhouse gas emissions by 2050, the same year. where several countries, including Japan, have committed to become net carbon neutral.

What the index highlights is the intersection between environmental issues. We can focus on gas-guzzling SUVs, the dangers of plastic straws, or power grids powered by coal, oil, and natural gas, but none of these are actually a stand-alone issue. None of these elements is in itself the key to solving our environmental crisis. Oil becomes disposable plastic wrap, and investments and loans become both.

In other words, the decarbonization of our economies is linked to keeping plastics out of our oceans, as well as maintaining the increase in global temperature under the scenarios of 1.5 and 2 degrees Celsius described by the Group. intergovernmental experts on climate change. The environment is interconnected, and so must our efforts to solve the problems that we have created there.

What are NFTs (non-fungible tokens)?