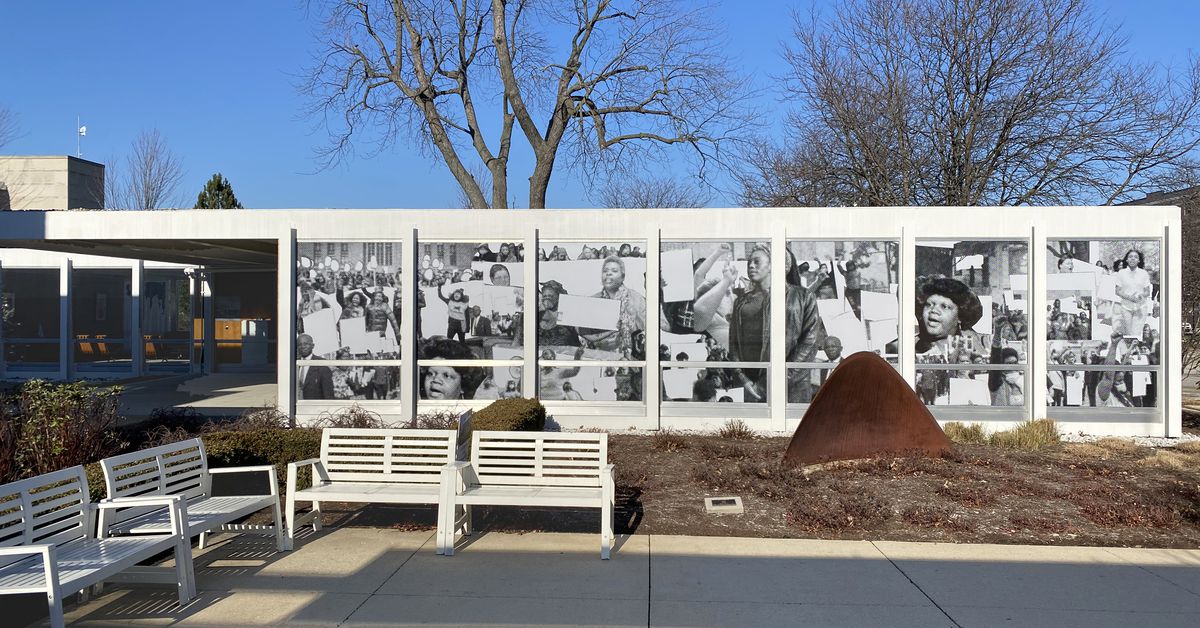 It is often said that a picture is worth 1,000 words, “but I think it is worth even more than that if a photographer is in the right place at the right time to capture something important,” explains Bernard Kleina, resident of Wheaton, whose historical images are the centerpiece of a new exhibition at the Elmhurst Art Museum entitled “In Focus: The Chicago Freedom Movement and the Fight for Fair Housing”.

Through June 20, the sprawling exhibit explores the systemic issues of racial discrimination surrounding housing opportunities in the Chicagoland region, combining a host of news articles, interviews and maps depicting extraordinary inequalities, as well as 40 photographs and testimonies of Kleina. of the revolutionary work of the Chicago Freedom Movement (CFM). Organized by Martin Luther King Jr., James Bevel and Al Raby from 1965 to 1967, the CFM was instrumental in enacting the Fair Housing Act of 1968, which outlawed discrimination in housing rentals and loans in according to race, religion, sex or national origin. .

An amateur photographer at the time interested in social justice, Kleina was on hand to capture many of King’s moves after the civil rights icon moved his family to a modest Lawndale house to explore issues of blockbuster and contractual disparities. that occur in the city. Kleina’s images are some of the only color depictions of King at the time, capturing him speaking at City Hall in July 1965, a rally of the Chicago freedom movement for open housing in Soldier. Field in July 1966, and violent clashes during a demonstration in Parc Marquette in August.

“Before photographing Dr. King, the only photos I took were of family or vacation. That’s why I photographed in color. It didn’t even occur to me to shoot in black and white like everyone else did for newspapers and magazines, ”Kleina recalls.

In fact, at the time, he was a Catholic priest and dean of the boys at Immaculate Conception High School, directly across from the Elmhurst Art Museum, where his photos are now on display. Kleina first became involved in the civil rights movement after watching television footage of the now infamous Bloody Sunday events in March 1965 and hearing King’s call for the clergy to come to Selma; his photos of Lewis, Brown Chapel, the Edmund Pettus Bridge and others from this era are also included in the exhibit.

“When we got there maybe it’s because I’m white, I thought I could do something to help. But I quickly realized that Selma had done a lot more for me than I could do for Selma. It literally changed my whole life, ”says Kleina who, shortly after King’s assassination in 1968, left the priesthood and spent the next four decades as executive director of the HOPE Fair Housing Center, an organization in non-profit based in the western suburbs. HOPE is also a sponsor of the “In Focus” exhibition and has worked with Elmhurst Art Museum to achieve the ultimate goal of “educating through art and architecture”.

“Looking at Bernie’s photos and realizing that the Chicago Freedom Movement was all about housing, we thought it was really a bigger picture of how we can talk about architecture as that museum. We’re not just talking about the architectural details of a single house, but rather bigger issues, ”says museum executive director John McKinnon. “One of the great things is that we were able to work with HOPE to demonstrate that it is not just an urban problem, but that it affects many families in neighborhoods in Illinois. And in this case, photography has become a great way to talk about historical events and show how much it has affected even places like Elmhurst. “

Kleina says that properly documenting the story was also his motivation to photograph the events of 1965-67 and King, whom he sadly never got to meet.

“So many officials and the media accused Dr. King of inciting violence, and I felt someone needed to document what was going on to dispel that kind of language.” It’s an important topic today too, “now that everyone has responsibility for a camera,” says Kleina, praising 17-year-old Darnella Frazier who last May filmed the death of George Floyd and turned the nation into action. “I tell the younger ones especially not to wait until they think they are totally competent to do any type of mission, because the moment may pass you by,” adds Kleina.

The Elmhurst Museum also wanted to incorporate current events and young artists into the exhibit for a larger context and to inspire action. Photographs of the summer 2020 protests taken by Chicago photographer Vashon Jordan Jr., 21, are also on display, along with a collaborative project, “Depth of Field” at the Design Museum of Chicago, by the Teen Council of Elmhurst. Art Museum and York. Black Student Union at Community High School, with collages made by teenagers in response to quotes about fair housing from activists and leaders.

The McCormick House adjoining the museum features “There are black dwellings in the future: equitable public housing as a memorial,” an installation by activists Alisha Wormsley of Pittsburgh and Chicago-based Ayanah Moor. “In Focus” ends with an action center with additional resources to help create change (also available online at elmhurstartmuseum.org).

Kleina will be giving a free virtual artist talk at 9 a.m. on Thursday via the museum website.