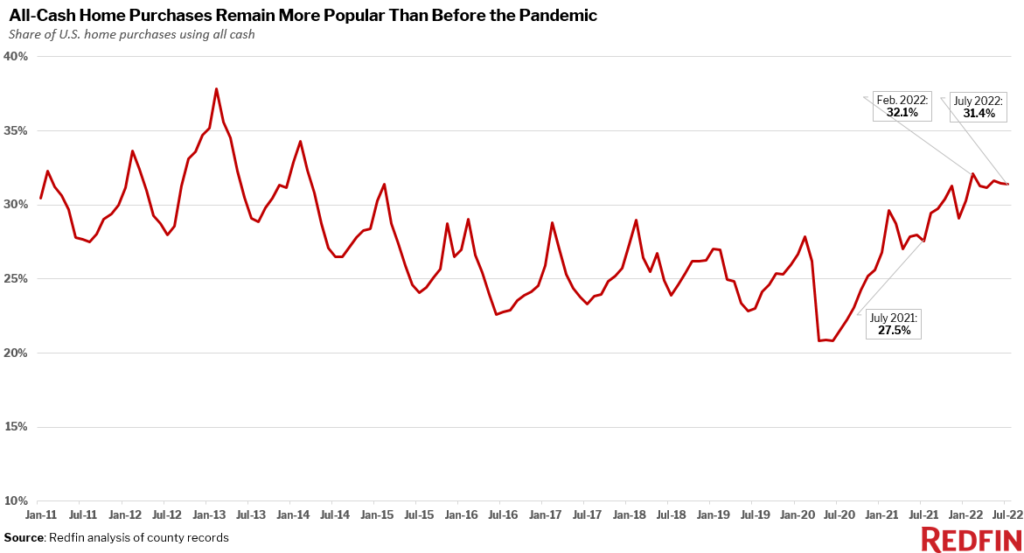 According to a new report from Redfin, almost a third (or 31.4%) of home purchases in the United States were paid for entirely in cash in July. That’s near the eight-year high reached in February and up from 27.5% a year earlier. The share of all-cash purchases surged in early 2021 during the pandemic-driven home-buying frenzy and has remained elevated ever since.

Cash purchases are common among affluent buyers today, largely because mortgage rates have doubled in the past year, hitting 6% in mid-September. Buyers who don’t use loans avoid high interest payments that exacerbate home prices, which remain near record highs even as the housing market slows.

Cash purchases surged in popularity last year as they set buyers apart from fierce competition: Bidding war rates hit record highs in early 2021 due to lower mortgage rates at 3% and remote working which stimulates demand from buyers. Remote work has also given more Americans the option to use cash when shopping, as it has enabled a record share of shoppers to move – often from expensive to affordable parts of the country. .

US home values ​​have skyrocketed since the pandemic began, meaning Americans selling a home in an expensive place like San Francisco can use equity to pay cash in a more affordable area. like Las Vegas or Dallas.

Investors are also contributing to the all-cash boom. Real estate investors bought a record share of U.S. housing stock in the fourth quarter of last year, and their share has remained above pre-pandemic levels since then. The study also found that around three-quarters of investors’ home purchases are made in cash.

Cash purchases are most common in Long Island, NY and Florida

Three of the five metro areas with the highest share of cash purchases are in Florida, in part because the state is home to many affluent shoppers. But Long Island, New York — which includes the Hamptons — is home to the largest share of cash buyers, with two-thirds (66.5%) of home purchases made in cash in July. Next come West Palm Beach (56.4%), Jacksonville (45.5%), Milwaukee (45.3%) and Fort Lauderdale (43.3%).

FHA loans are a little more popular than they were at the height of the market, but less prevalent than before the pandemic

Even though cash purchases are at their highest level in eight years, most home purchases use loans. Conventional loans are by far the most common type, followed by Federal Housing Administration (FHA) and Veterans Affairs (VA) loans.

More than eight in 10 – or 81.3% – of home sales that used a mortgage in July took out a conventional loan, down slightly from 81.9% a year earlier and down from a record high of 83.8% established in April.

“Rising interest rates are shutting some buyers out of the market, but they’re also helping some buyers get in market because there’s less competition,” said Tampa Redfin agent Eric Auciello. “Many buyers who were repeatedly outbid earlier this year are seeing their offers accepted, including those using FHA loans, those with smaller down payments, and those that include inspection and financing contingencies. In 2021 , hardly any buyers have used FHA loans.The story is completely different now, because low down payments are no longer an automatic deal breaker for sellers.

FHA loans are still much less prevalent than they were pre-pandemic, with around 17% of mortgage purchases used in 2019. That’s partly because even though the market has cooled and FHA buyers are less likely to face competition, homes are still quite expensive: The typical American home that sold in July cost about 8% more than a year earlier.

The study found that VA purchases are about as popular as they were before the pandemic, with about 7% of mortgage purchases using them in 2019.

To read the full report, including more charts and methodology, Click here.